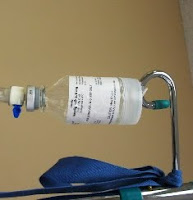 “OK” I replied, now understanding that even “Baku” and his GPS were part of my therapy.
Posted by Kelvin Lord at 10:43 AM